Eight years of scholarships for mainland students at CUHK

The Chinese University of Hong Kong Vice-Chancellor Joseph Sung, faculty members and some of the scholarship recipients recently met SHKP Chairman and Managing Director Raymond Kwok to express their gratitude for the HK$25-million scholarship programme that the Foundation has run since 2005 for top mainland students at CUHK.

The Foundation has committed RMB3.6 million (approximately HK$4.5 million) to a scholarship programme at Tianjin University for the 2013 academic term, helping outstanding students of limited means pursue four-year undergraduate degrees. The Foundation has granted a total of RMB7.6 million to nearly 1,000 students since the programme was established in 2009.

The Foundation and the Cambridge Commonwealth, European and International Trust have been running a scholarship programme since 2004 to help top students with limited means to study at the University of Cambridge. A total of eight deserving students from Hong Kong and the mainland were granted about HK$4 million in 2013, covering full tuition, accommodation and living expenses over three years for doctorate or one year for master's degrees. 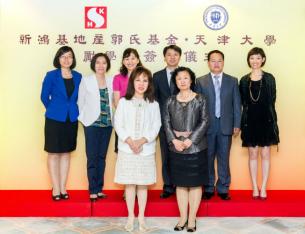 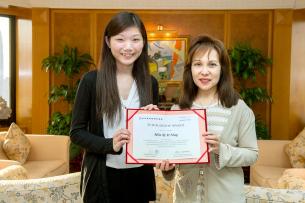