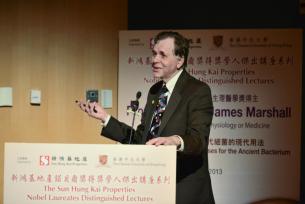 The Sun Hung Kai Properties Nobel Laureates Distinguished Lectures organized by SHKP and The Chinese University of Hong Kong recently had Nobel laureates Joseph E. Stiglitz and Barry James Marshall lecturing about their theories in Hong Kong. Places were reserved so that SHKP Club members could hear the internationally-acclaimed scholars.

Sustainability after the crisis

The 2001 laureate in Economics Professor Stiglitz lectured on Sustainable Growth in the Wake of the Crisis: Lessons for Asia and the World in mid November, explaining the implications of the financial crisis that began in 2007 for economy theory and policy. He also explained the hazards and opportunities facing the economies of Asia and the world as a whole in the aftermath of the crisis.

The 2005 laureate in Physiology / Medicine Professor Marshall lectured on Helicobacter Pylori: Modern Uses for the Ancient Bacterium in mid October. He spoke of new evidence suggesting that helicobacter might play a beneficial role in controlling what could be an overactive immune system in the 21st century by mitigating the harms of bacteria with new helicobacter products.

The Distinguished Lecture series has included over 20 Nobel laureates or renowned scholars talking about their knowledge and achievements since it began. Many of the lectures were telecast live to local and mainland tertiary institutions to foster academic exchange.