2013 Race to ICC-100 – SHKP Vertical Run for the Chest 1,000 local and international runners race for charity

The 2013 Race to ICC-100 – SHKP Vertical Run for the Chest staged by SHKP and The Community Chest of Hong Kong on December 1 was a great success. It attracted over 1,000 local and international runners; triple the field last year. The event was also the grand finale of the 2013 Vertical World Circuit.

Elite runners from all over take part

There were four event categories over the day: elite, corporate relay, individual and fun climb. The elite race had 23 world-class athletes and the winners in the men's and women's groups were Australians Mark Bourne and Suzanne Walsham. They were also overall champions of the 2013 Vertical World Circuit. The elite race was followed by the corporate relay, with 172 contestants in teams. Two Kowloon Motor Bus teams took first and second places. Then there was the individual race with nearly 600 runners in three age brackets and the fun climb that attracted over 200 people who wanted the try the benefits of non-competitive stair climbing.

SHKP staged a number of activities in the lead-in to the event and started a stair-climbing craze in Hong Kong. There was the Go! Baby Go! – Vertical Run where 18- to 24-month-old toddlers and their parents took part in a mini stair-climbing competition to help develop sporting talent and a competition for secondary school students to assemble flash mob cheerleading performances in SHKP malls to support the Race to ICC. Another initiative for residents of SHKP developments was Steps-Up to the Top. This involved people using designated cross-trainers in residential clubhouses with SHKP pledging to donate HK$1 to The Community Chest for child and youth services for every ten steps taken. There was also a Vertical Dog Walk for owners and their dogs climbing stairs to strengthen muscles and joint flexibility. 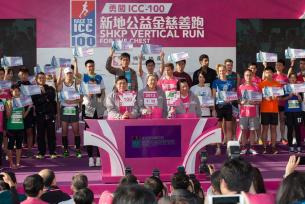 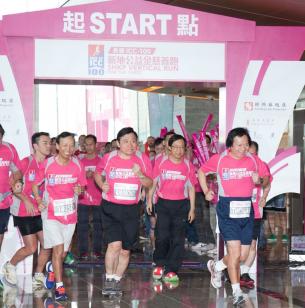 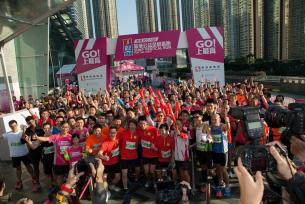 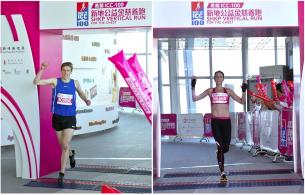