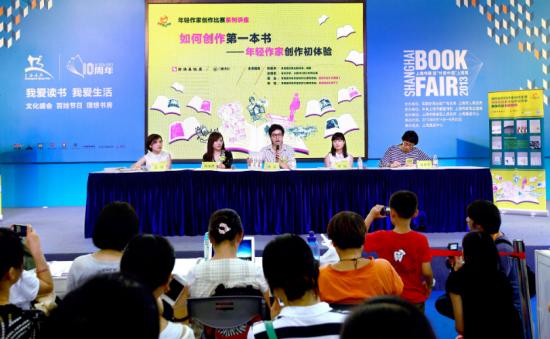 The Shanghai and Hong Kong Book Fairs and Taipei International Book Exhibition were recently called the Top 3 Chinese language book fairs. The ten winners of the fourth Young Writers' Debut competition came out in simplified Chinese characters at the Shanghai Book Fair in August after the Hong Kong Book Fair in July this year. Two of the competition judges and some of the winning writers exchanged their creative ideas with readers at a seminar in Shanghai.

SHKP set up the SHKP Book Club to promote reading and creative writing. The Book Club has staged four Young Writers' Debut competitions with Joint Publishing (HK) and the latest one was extended to the mainland for the first time in an effort to enhance cultural exchanges between the mainland and Hong Kong. One of the competition judges, noted writer Zhang Yue-Ran, said it was refreshing to see many Hong Kong entries based on true stories, as young mainland writers preferred fiction. Another judge, noted Hong Kong theatre director Edward Lam, encouraged young people to have a clear understanding of themselves and their goals, as sincerity is the only way to arouse people's feelings.

Two Young Writers' Debut competition winners talked about their creative experience at the seminar. Brownwhite, author of the winning title Husband-Wife Businesses, spent nine months visiting seven half-century-old stores and kept a journal of how the couples met, started families and businesses together and pursued their dreams. The other author Kori Song moved from Sichuan to Hong Kong several years ago and her book Cicada contains short stories and illustrations tracing her feelings.