The art of tempura is the ultimate in fried food; both a staple of Japanese cuisine and an integral part of gourmet dining, and at the classic, century-old Inagiku Grande the key is the chef's unique focus on detail during preparation. The Inagiku Grande Japanese Restaurant in Central under the Royal Garden has been included as a recommended restaurant in the 2017 Forbes Travel Guide and was the only Japanese restaurant in Hong Kong to earn this distinction.

Visitors to Inagiku Grande in Central are immersed in the Zen aura, enhanced by the sparkling Victoria Harbour just beyond the grand windows. The restaurant’s extensive gourmet offerings range from their famous tempura to kaiseki cuisine, sashimi, sushi, teppanyaki and more, each a showcase of elegant Japanese culture. Inagiku Grande tempura chef Kunio Sakuma says that fresh ingredients, high-quality oil at the right temperature and special batter at the proper consistency are the secrets to perfect tempura. Regulars who know the essence of good tempura like to sit by the chef's station so they can savour the fragrance of hot, crispy delicacies being prepared.

Inagiku Grande has a new Forbes Travel Guide celebration menu to mark its prestigious listing, and SHKP Club members can get 10% off* the special menu by showing their cards on or before 30 June 2017 to indulge in tempura, sashimi, sushi, teppanyaki and other classic Japanese food. Below we have chef Kunio Sakuma explaining the art of making tempura shrimp with just a wispy layer of batter. 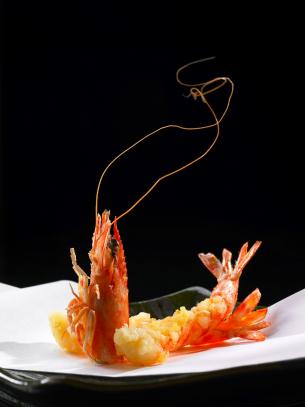 Tempura shrimp (picture is representative only)