The fifth SHKP Vertical Run for Charity – Race to Hong Kong ICC attracts over 1,700 runners to race up stairs

SHKP Vertical Run for Charity – Race to Hong Kong ICC was successfully run on 4 December. The sporting event again served as a platform for the public to scale stairs in the spirit of sport for charity which attracted more than 1,700 athletes, and represented the grand finale of the Vertical World Circuit for the fourth year in a row where top runners vied for the world championships.

Comprising Race to Hong Kong ICC and Race to Shanghai IFC, the SHKP Vertical Run for Charity has been an international sporting event that integrates exercise with charity. SHKP Deputy Managing Director Mike Wong attended the open ceremony and said: "Proceeds from the event will go to support child and youth services, including a new project called Rainbow with KIDS by The Hong Kong Council of Social Service that helps relieve stress in children and young people under 18 subject to family crisis, violence or tragedies. The project will drive them to regain confidence to cope with new patterns in life for a positive mindset in future. Other proceeds will go to Mother’s Choice, Hans Andersen Club, Hong Kong PHAB Association and Suicide Prevention Services through The Community Chest."

A field of 24 top runners from 12 countries or regions took on the Race to Hong Kong ICC challenge. In the end, Australian runner Mark Bourne took the men's Elite race in 12 minutes and 12 seconds while Suzy Walsham, also from Australia, won the women's category in 14 minutes and 25 seconds. Suzy Walsham also won the women's 2016 Vertical World Circuit along with Polish runner Piotr Lobodzinski for the men.

The Race to Hong Kong ICC included Elite, Individual, Team Relay and Fun Climb. The student relay category saw the biggest increase in participants. Tin Ka Ping Secondary School Team A won the secondary student relay in 13 minutes and 38 seconds while Hong Kong Baptist University took the tertiary relay in 12 minutes and 12 seconds. Su Hsin Kai and Huang Yu Hong were overall champions of the men's and women's Individual races, and they will both get SHKP sponsorships for the 2017 Vertical World Circuit.

An array of activities to liven up the athletic atmosphere was staged on race day. The Playright Children's Play Association (Playright) had again worked with the organizer and offered a range of games for children and their parents. Guests could also take a spin with indoor Wattbike trainers and ask on-site caricature artists to draw runners with a playful twist. 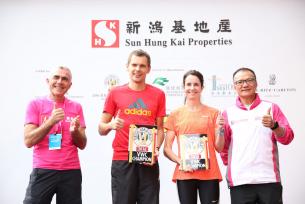 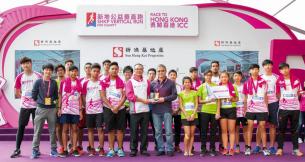