Shanghai is a favourite destination for many travellers and Shanghai ifc mall is welcoming Christmas this winter with a Disney TsumTsum Shining Christmas, while iapm mall in Xuhui has Santa Claus Happy Town to liven up the festive season.

Shanghai ifc mall has Mickey, Minnie, Donald Duck, Snow White, Winnie the Pooh and Tyger – the Disney Tsum Tsum members who have been sweeping the world–coming in to celebrate Christmas with customers this year. There is an elegant Christmas garden in the display with a statue of Mickey by a clock tower welcoming everyone, and a corner allowing visitors to take panoramic images with Disney Tsum Tsum. Come to see an installation on the theme of Christmas Party and admire the stylish Tsum Tsum Christmas trees. Shoppers can redeem limited-edition Tsum Tsum items and Christmas hampers to add festive joy and show your care to loved ones.

Member privilege
Members can redeem a limited-edition Shanghai ifc Tsum Tsum tote bag for spending RMB1,500 in the mall on 24 and 25 December 2016. Only 20 are available on a first-come-first-served basis.

Young children love asking Santa Claus for gifts, but the older ones may be more interested in where Santa gets them. iapm and noted international designer Mila Marquis created a colourful Christmas cottage and giant tree in the mall along with over 30 Santa statues all around to create a wonderful, dream-like atmosphere. The exhibition has a virtual reality 3D model of Santa’s Gift Cottage workshop where visitors can help Santa speed up production using VR technology. Visitors to the outdoor garden can marvel at a statue of Santa in his sleigh pulled by four reindeers getting ready to deliver gifts. There is additionally Santa’s treasure trove to get Christmas gift recommendations prepared by the mall. 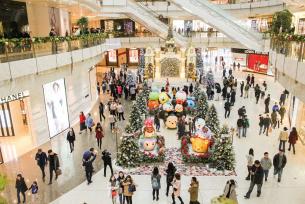 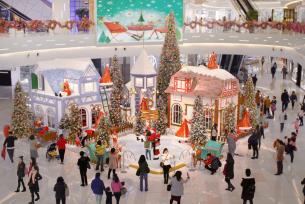