The SHKP ICC Light and Music show for summer beginning in May will exhibit pieces of light art by artists from six different countries on the world's tallest LED screen, showing Hong Kong the latest international media art on the shore of Victoria Harbour.

ICC has collaborated with the City University of Hong Kong School of Creative Media on the Open Sky Project since 2014. This is a media art project that invites students from the school to design light art for the ICC Light and Music Show. The project was extended in 2015 to cooperate with the Hong Kong Arts Development Council and ISEA 2016 -- widely regarded as the Olympics of international digital media. A range of exquisite works by 70 artists from around the world were received after an open global call and a panel of 11 new media artists, scholars and curators eventually chose six outstanding pieces from Germany, Austria, the UK, USA, France and Hong Kong for display at ICC in May and June.

ICC has also been invited by the Hong Kong Arts Development Council to co-organize The 5th Large-Scale Public Media Arts Exhibition: Human Vibrations curated by Carline Ha Thuc. The exhibition is a proud addition to the ISEA 2016 Open Sky Project, with media artworks from Laurent Mignonneau and Christa Sommerer presenting on ICC facades that will encourage the public to experience the invisible frequencies and hidden vibes in the city and question their impacts on our daily lives. Watch out for the brillance! 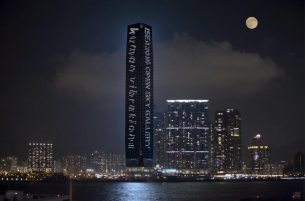