An arched doorway, exquisite murals, hand-painted ceiling…dining in such an enchanting setting at the Italian Sabatini restaurant is bound to make an indelible impression on your important date. Here we have one-star Michelin chef Gleb Snegin explaining two dishes so you can experience the taste and elegance of Sabatini at home. 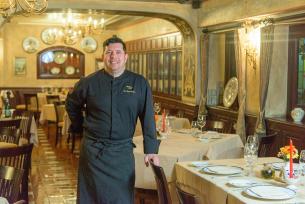