Admiring the sky mirror in Bolivia 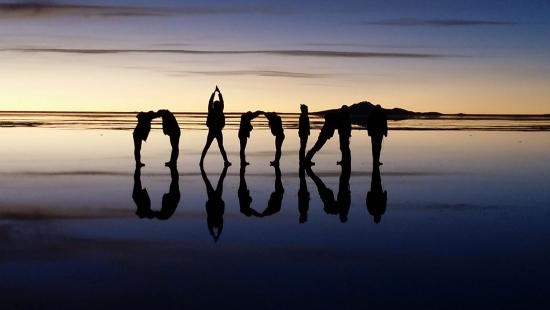 A group of Koreans spell out Uyuni

Bolivia is a South American country that everyone should see. Much of the territory is unspoiled and travellers should not miss out on the Salar de Uyuni, dubbed 'the sky mirror' and seemed a wonderland. There are many ways to get to Uyuni but we flew to La Paz and took an overnight bus.

La Paz, the capital of Bolivia, is at 3,892 metres above sea level. It is the highest capital city in the world but we didn't take anything for altitude sickness and so experienced some symptoms upon landing and found it difficult to breathe. We followed a tip from our friends in Scotland and took some lozenges. The symptoms were alleviated, but we still had to do everything extra slow to avoid feeling giddy. Nonetheless, the unique scenery more than made up for a little discomfort!

You can take a plane, train or bus from La Paz to Uyuni. We brought our own food for a more convenient, cheaper ride and opted for overnight bus, the most economical option. While it takes 11 hours we are at our destination when we wake up, so it's not a bad choice. There are three classes on the bus – Cama where you can sleep flat, semi Cama where you sleep in a seat and semi Cama with dinner, breakfast and Wi-Fi. We decided to pamper ourselves with Cama. The journey started at six in the evening and we reached our destination at seven the next morning. . We felt the sheer joy of being with more travelling companions when we saw a group of Koreans on the bus, and A Man determined to ask more friends along on the next trip to South America!

The best time to visit Uyuni and see the sky reflected in the lake is during the wet season from December to February. Though we went in the dry season in May, we had expectations for the trip and followed a friend's recommendation to find a travel agency that organized sunset tours and signed up for the three-day, two-night package in search of sunset reflections. The agency's policy of giving a refund if we didn't see the sky mirror gave us peace of mind.

Just 20 minutes into the tour, the sight of parched land around us made us a bit nervous and 10 minutes later we saw a lake that was mostly salt and had very little water. We wondered if the driver thought we would be satisfied seeing these little puddles, but luckily he kept going and after another 15 minutes we saw water. It wasn't as beautiful as we imagined, but we did see a bit of the sky mirror and that had everyone getting out of the bus to take photos. Ours was the only group there so it was easy for everyone to spread out and find an ideal photo spot, and there were few ripples to affect the photographs. Given that it was all white and fuzzy with no sense of proportion, it was also a great place to shoot perspective photos other than shooting reflections. Everyone had fun coming up with all sorts of weird poses and I even gave A Man a taste of what it is like to be under my foot. Ha, ha!

Just when we thought this was it, a truly magnificent sight appeared as the sun began to set and we were all captivated. The sound of cameras clicking and cries of 'linda' (Spanish for very beautiful) filled the air. I must have taken over 100 photos in slightly more than 20 minutes. When the sun had set completely and our hands and feet were numb from the cold, everyone reluctantly trudged back to the bus.

The driver misunderstood us on the way back and didn't give us a chance to see the starry sky, but we weren't too bothered because we had already seen the beautiful sky mirror. Back in the city with our travelling companions, we decided to look for the 18 BOB barbecue recommended by a middle-aged Taiwanese man. Luckily, we returned early and managed to find the place. A meal of generous barbecued beef slices with rice and local fruit juice only cost us 20 BOB each, and it was a tasty, satisfying end to a truly wonderful day!

(By A Man and his wife A Pan who work in television. They love travelling the world and are happy to tell their story of South America to SHKP Club members in this edition.)

A Man under my foot

Heaven and Earth in Uyuni 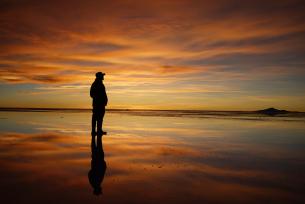 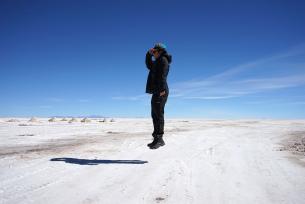 Levitation is easy in Uyuni

Alpacas are common in Bolivia