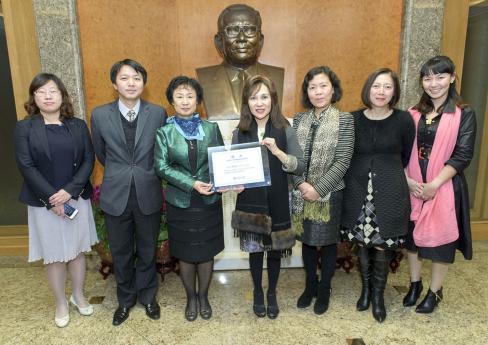 The Tianjin University scholarship fund set up by the SHKP-Kwoks' Foundation in 2009 has awarded over 1,300 scholarships totalling RMB 7.6 million. The university delegation visited SHKP headquarters and expressed gratitude over the Foundation's continuous support for financially deprived students, and appointed Foundation Executive Director Amy Kwok as a university director.

The scholarship fund has provided outstanding students with limited means an opportunity to achieve academic excellence for better career prospects, which will enable them to lift their families from poverty and to give back to society. Amy Kwok said: "The Kwok family believes that education lays a foundation for the future. Many scholarship recipients even took on senior positions in government agencies or international companies after graduation, and we hope that outstanding students from Tianjin University can also grasp the opportunity to climb the social ladder and create a better tomorrow. I'm honoured to have been appointed as a director of Tianjin University, which is a very prestigious role. The Foundation will continue working for charitable causes and collaborating with Tianjin University to nurture more talented individuals for the country."