A visit to Yellowknife in search of the magical aurora borealis

Yellowknife is the capital of the Northwest Territories in Canada just several hundred kilometres from the arctic circle, where the ethereal blue and green aurora borealis can be seen two thirds of the year. The best months to catch the aurora are from December to April. Seeing the wonder of the universe is definitely something you have to experience at least once in your life.

A wonder of nature

The population of Yellowknife is about 20,000. Even though it is extremely cold, Yellowknife attracts tourists from around the world every year in search of the legendary aurora. The cold subarctic climate requires special attention to warm clothing, but there is no need to worry as a full set of equipment can be rented there including a jacket that can keep you warm in temperatures as low as -60°C, snow pants, boots, hat, gloves etc, so you can chase the lights in relative comfort.

An exciting time in extreme landscape

Other than searching for the aurora, you should use the day to speed over the snow in a sled for a real experience of nature in the vast, remote landscape. As Canada is committed to protecting its natural resources, only aboriginal people are allowed to fish on a large scale and ordinary people need a license. This allows the fish to reproduce and flourish. That means it is highly likely that an ice fishing trip to the frozen Great Slave Lake will let you catch large fish that have grown up in a pollution-free environment! Riding a Hagglunds, enjoying bison steak and traditional native drum performances are just some of the other wonderful activities available that are bound to be exciting!

Aurora against a backdrop of stars

As night falls, seekers of the aurora gather at the famous local Trout Rock Lodge to begin their wait. Finally, the wait is over as green, blue and pink lights interlace to form magical images. Who could imagine that the effects of the Earth's magnetic field on moving ions would be so magnificent and eye catching? Watching makes the insignificance of human beings in this vast universe dawn upon you, and makes you realize that only change is eternal! The aurora does not appear at fixed times and can last from tens of seconds to tens of minutes, so whether you see it is a matter of luck. It is advisable to go online to check the local weather station for changes to aurora activity before choosing a departure date, to stand a better chance of catching it.

Shooting the ever-changing aurora borealis is the ultimate challenge for many photography enthusiasts. You need to be equipped for night photography with a DSLR, tripod, large aperture lens, back-up batteries and more. You also need to be well versed in long exposure techniques to capture the unforgettable moment.

Transport: There is no direct flight from Hong Kong to the Northwest Territories but you can fly from Vancouver to Yellowknife on Air Canada or WestJet.
Website: The Yellowknife Tours website (www.yellowknifetours.com) provides information on guided tours conducted in Chinese, a rarity in the town, as well as materials on aurora packages.
Currency: Canadian dollar
Climate: The subarctic climate of Yellowstone means a huge difference between day and night temperatures; in the months from October to April, the temperature can go as low as -30°C. Other than the temperature, you should also pay attention to the wind-chill effect mentioned in weather reports, as this makes it feel even colder. 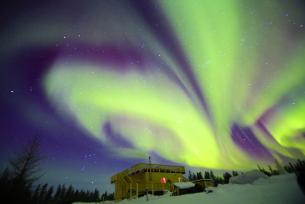 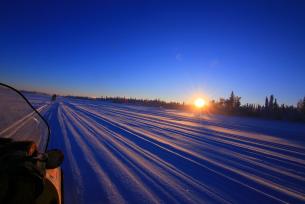 Riding a snowmobile on a frozen lake 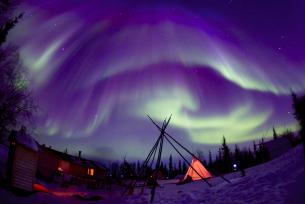 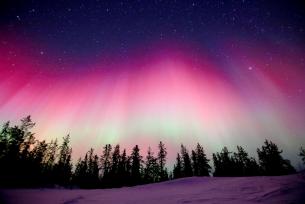 At times near and at times distant, the colourful, bright aurora 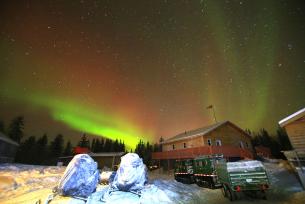 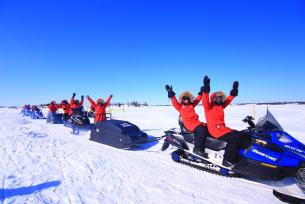 A variety of daytime activities to choose from, including snowmobiling 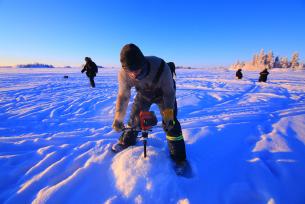 Drilling a fishing hole in the frozen lake