SHKP's Love Nature Campaign included a number of activities in November and December to clean up coastal areas. SHKP staff, their family and friends along with volunteers worked with a group of high school students, teachers and parents to do their part for the marine life in Lung Mei, Tai Po, together with South Lantau Bay and Tung Chung Bay on Lantau Island. Lung Mei is just next to Ting Kok and has a natural ecology of mangroves, beaches and mudflats with more than 200 species recorded in an ecological survey of the area, including the endangered and protected estuary seahorse. Over-fishing and pollution have led to a rapid decline in estuary seahorse numbers in Hong Kong and the rest of the world. South Lantau Bay, the southern part of Lantau Island, is one of the few breeding grounds for horseshoe crab in Hong Kong. Dubbed 'living fossil in the ocean', horseshoe crab has a 300-million-plus evolutionary history and is valuable for medical research. However, the species has undergone a drastic population decline due to coastal pollution. Tung Chung Bay is one of the few remaining natural estuaries in Hong Kong and it has a rich diversity of life including a variety of mangroves, fiddler crabs and the seaweed pipefish. The pipefish is a close relative of seahorse and is easily affected by pollution due to its weak swimming abilities. Participants on the outing cleaned up the shore and then had a guided eco-tour that gave a better understanding of the coastal ecological system to make the event even more meaningful.

Recognition from the Social Welfare Department

SHKP uses its corporate resources and expertise to care for the underprivileged. The SHKP Volunteer Team put in over 121,000 hours of service in 2013, earning a silver Highest Service Hour award (Private Organizations – Category 1) at the 2014 Hong Kong Volunteer Service Award presentation from the Social Welfare Department in November. The team also received an Outstanding award in the 2013-14 Best Corporate Volunteer Service Project Competition with their landscaping project for Helping Hand's Cheung Muk Tau Integrated Services Complex and Father Sean Burke Care Home for the Elderly. SHKP landscape designers and volunteers gradually beautified the landscape at the premises so the elderly residents could enjoy a lush environment in their retirement. The team encouraged some residents to help and experience the fun of gardening as well, to relax the mind and body. 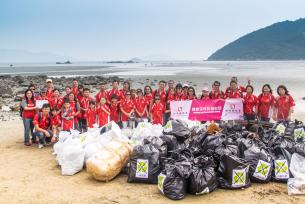 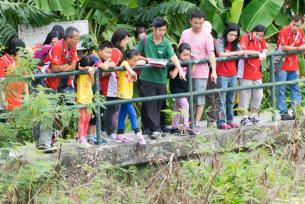 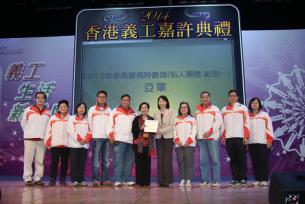