A tour of culture and art in the Czech Republic

The Czech Republic is in Eastern Europe and its capital, Prague, has been called the most beautiful city in Europe. Prague has preserved buildings from different historical periods and in different architectural styles like Renaissance, Gothic, Baroque and Art Nouveau. The small towns surrounding the capital are full of arts and culture and are well worth visiting.

All the famous sights in Prague are close to each other and can be covered in a day. If you like to take your time to soak up the romantic old-world ambience it's best to do away with a map and just use the Charles Bridge, the old town square's Astronomical Clock and Powder Gate as reference points, then lose yourself in the streets and alleys that date back to the Middle Ages. Every building has a story about Prague's history, like carvings in the top of a tower, engravings on pillars or related sculptures. Maestro Alphonse Mucha was one of the Czech Republic's top artists and a master of the Art Nouveau style. His masterpiece stained-glass window is in the St Vitus Cathedral and the Mucha Museum at the heart of Prague is also a favourite with art lovers.

The beautiful Charles Bridge is a must-see in Prague. It was built in 1357 and completed at the beginning of the 15th century as the main link between Prague Castle and the city's Old Town. It was restored in the 1970s and is now a pedestrian zone popular with artists, musicians and craft vendors lining both sides of the bridge year-round. Take in the rich artistic atmosphere and look out for the replica statues along both sides of the bridge carved in the 18th Century baroque style. One of them is of St John of Nepomuk, a Czech martyr saint who was well-loved by the people of his time. The statue attracts many tourists to pose for photographs.

Český Krumlov is a lovely small town that seems like it belongs in a fairy tale. It's south of Prague and can be reached by a four-hour train ride followed by a bus to the city centre. Visitors are greeted by distinctive houses in a multitude of colours on either side of a meandering river. Interesting shop signs and intricate murals on buildings give a quiet, relaxed country feel.

One essential for tourists in Český Krumlov is a visit to the castle. There are two main principal tours; one allows visitors to explore Renaissance and Baroque style rooms, a golden carriage and the house of masks, while the other lets people appreciate the interior designs from the 19th Century. Visitors in summer can take in an open-air theatre on the castle grounds for evening performances. One interesting feature (depending on the show) is that the stage and audience can turn 360 degrees, transforming the starlight, torches, candlelight and castle garden into the depths of a forest, with the scent of the wood and chirping birds to make the audience feel they are part of the play. The shows are in Czech but the stage production is enough to make people gasp in amazement. 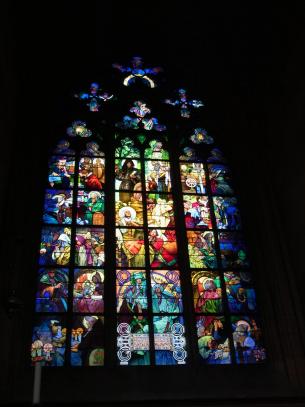 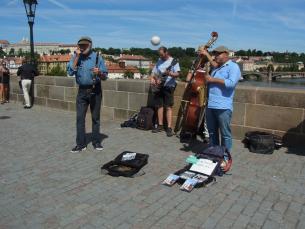 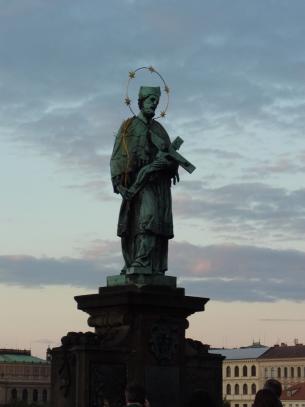 Statue of Czech St John of Nepomuk, drowned for refusing to reveal confessional details, with a typical five-starred halo 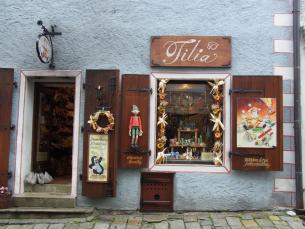 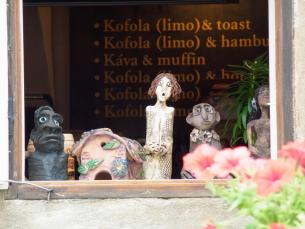 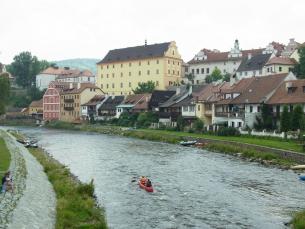