Sun Hung Kai Properties (SHKP) continues to provide timely support to people in need in the community through different means. As part of the Building Homes with Heart Caring Initiative, SHKP recently collaborated with different social welfare organisations on anti-pandemic support projects. The SHKP Volunteer Team distributed festive food and anti-pandemic items to underprivileged families in the Island East and Kwai Tsing districts, and to the elderly residing in Sham Shui Po to show its care, benefitting about 12,000 people. In view of the disruption to social life faced by elderly people because of social distancing, the SHKP Volunteer Team expressed care via different ways, such as talking to elderly people over the phone to give them emotional support, as well as delivering surgical masks to them.

SHKP Reading Club recently launched the "Read at Home with You" online campaign, inviting avid writers from primary and secondary schools to contribute to the online "Read For More" reading platform, and to experience the joy of reading whilst school is suspended.

Please click here to read the other incredible pieces of work, and to get an understanding of how our student contributors have used their creativity to share the joy of reading (in Chinese only).

SHKP-Kwoks' Foundation has collaborated with Tianjin University to set up a scholarship programme that helps talented students with limited means progress to undergraduate degrees since academic year 2009. Recently, there has been some good news from two of the student beneficiaries at Tianjin University: Cui Bohan of the School of Mathematics was selected as the 14th "Star of Self-Improvement of Tianjin University", and Guan Shiwei of the School of Civil Engineering also won the nomination award. The award campaign aims to inspire students from economically disadvantaged families to work hard to excel in their academic performance, in innovation and technology, charity services, and to become role models. SHKP-Kwoks' Foundation Executive Director Amy Kwok congratulated and commended the two awardees, appreciating their spirit of self-improvement and care for others.

The "New Wing Fund", initiated by a group of Hunan University alumni who have been awarded scholarships by the SHKP-Kwoks' Foundation, completed their first funding assessment recently. SHKP-Kwoks' Foundation Associate Director Terry Li pointed out that the "New Wing Fund" is the first self-started project set up by alumni who used to be student beneficiaries since the SHKP-Kwoks' Foundation started their student aid work on the mainland. The fund encourages students to engage in public welfare and expand their horizons and capabilities. This is also a model example of student beneficiaries continuing to pass the torch of kindness on to the next generation. 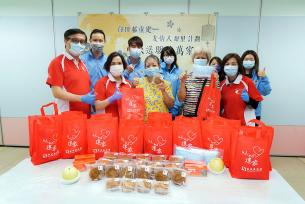 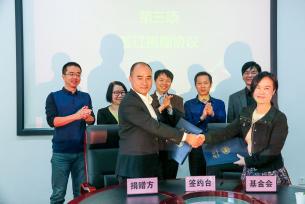 The New Wing Fund", set up in 2018, was initiated by a group of Hunan University alumni who have been awarded scholarships by the SHKP-Kwoks' Foundation