A multi-dimensional approach to environmental protection

SHKP has always been a strong advocate for protecting and respecting the natural environment. In addition to the implementation of green management in its companies, the Group has a track record of supporting activities organized by various green groups. With vast experience in property management and practicing of creative eco-friendly principles, SHKP property management subsidiaries Kai Shing and Hong Yip have earned 10 awards at the recent 2013 Hong Kong Awards for Environmental Excellence (HKAEE).

The 2013 HKAEE is co-organized by the Environmental Campaign Committee, Environmental Protection Department, and various other organizations. After coming away with a Silver Prize last year from the HKAEE, Kai Shing swooped the Gold Award (Property Management) for International Commerce Centre (ICC), which adds up to a record of five golds for SHKP developments in these honours. Since early 2013, ICC has been working towards a higher energy efficiency by actively enhancing its electricity, elevator and lighting systems, resulting in a LEED Platinum recognition for interior design. Kai Shing also trained a group of Green Ambassadors to promote environmental protection and food waste reduction to the tenants of ICC. It has also taken measures to reduce the size of solid waste and make recycling more convenient by collecting 20 kinds of recyclable items such as cooking oil, festive food leftovers, plants and wooden items, as well as installing an aluminium can compressor in the garbage collection area.

Lamma Island is a place known for its silky sand and clear water. The island's enchanting Lo So Shing beach, which features a natural landscape, is home to a few hundred metres of mangroves, and a coastal habitat of animals and plants. However, the beach is hit with marine debris from the sea caused by the wind. By encouraging staff to participate in and through the SHKP Love Nature Campaign, the Group joined forces with primary school students and parents to form a team of about 200 volunteers to clean up the beach. The event also offered educational value as participants can learn more about the coastal habitat and plants, such as Screw Pine, Sea Lettuce and other kinds of mangroves. 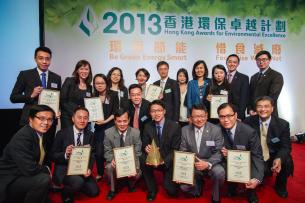 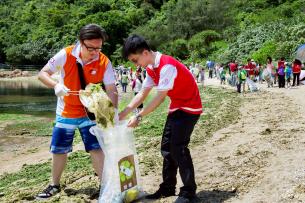