Igniting the passion for writing in young people

To young people who love to write, publishing a book must be one of their aspirations. After successfully helping 33 teenagers to realise their dreams of becoming an author, and to promote cultural interaction between the young people of Mainland China, Hong Kong, Macau and Taiwan, SHKP is once again teaming up with Joint Publishing HK to organize the Young Writers' Debut Competition. At the same time, the SHKP Reading Club held a series of activities to promote the culture of reading.

The fifth Young Writers' Debut Competition has increased its geographical reach and is now open to participants from Mainland China, Macau and Taiwan on top of those in Hong Kong. A number of creative professionals and seasoned writers have also been invited to form the panel of judges, including famous actress Sylvia Chang from Taiwan, Hong Kong award-winning film director Adam Wong and composer and lyricist Joe Lei from Macau. A total of 25 entries would be chosen from all the works submitted and each finalist would be awarded. At the same time, the panel of judges would also provide one to one guidance to every finalist. This would help them gain deeper insights into the art of writing and refine their work. Finally, the top 10 entries would be published in both traditional and simplified Chinese and distributed in all four regions. The top 10 writers would also be awarded with a publishing contract and earn royalties from the sales of their books.

Past entries of the Young Writers' Debut Competition are rich and diverse in both concept and form, for example, fictional novels, fairy tales, biographies, travel stories, picture books, photo galleries, and even plays, etc. thoroughly exhibiting the imagination of young people. This year's theme is "Discovery" and residents of Hong Kong, Macau, Mainland China or Taiwan who are below 35 years old and have never published a book before in a personal capacity are welcomed to take part. The registration deadline for the first round of the Young Writers' Debut Competition is 18th October.

Cultural activities to promote the joy of reading

In conjunction with "World Book Day" on 23rd April, the SHKP Reading Club also organized a series of cultural activities in April such as the "In Search of Book Titles in the Movies" contest on Facebook, roving exhibitions at more than 10 primary and secondary schools to encourage more students to enjoy the pleasure of reading, and organizing lectures featuring winners of the Young Writers' Debut Competition to share their creative journey in order to encourage more students to make use of the opportunities available to get their literary work published. 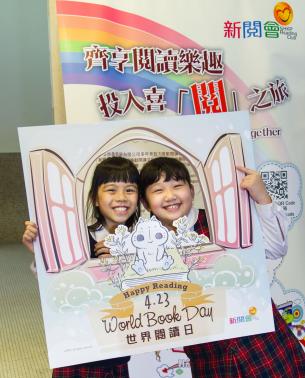 SHKP Reading Club organised roving exhibitions at schools, as to encourage students to enjoy the pleasures of reading