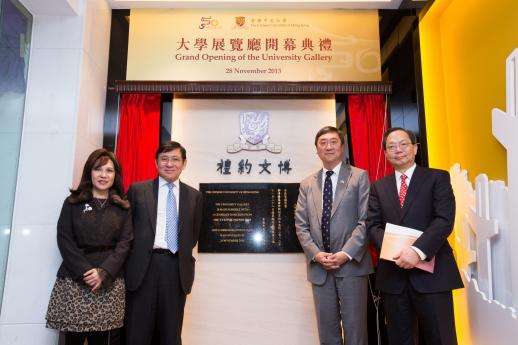 From left: Amy and Raymond Kwok for the TS Kwok Foundation with The Chinese University of Hong Kong Vice-Chancellor and President Joseph Sung at the university gallery opening

SHKP founder Mr Kwok Tak Seng knew that education plays a major role in social development and the Kwok family does its part to nurture talented individuals with numerous bursaries, scholarships, and academic initiatives in Hong Kong and on the mainland through the TS Kwok Foundation and SHKP-Kwoks' Foundation.

The TS Kwok Foundation sponsored a special gallery at The Chinese University of Hong Kong to celebrate its golden jubilee. The gallery contains hundreds of rare photos and artifacts and has multimedia resources to chronicle the university's history, memorable moments and achievements over the past 50 years as it evolved with Hong Kong. SHKP Chairman and Managing Director Raymond Kwok attended the gallery opening and said that no matter how challenging the environment was, the university was still able to produce high-calibre students who could forge a bright future, making it a reflection of Hong Kong society in general. The gallery does not just trace the university's development, but also that of an entire generation in Hong Kong.

Separately, the SHKP-Kwoks' Foundation has also been running a scholarship programme to help talented mainland students with limited means study at Nanjing University for ten consecutive years. The Nanjing scholarship programme began in 2006 and has provided over RMB10 million to 2,200-plus students. Foundation Executive Director Amy Kwok said: "The Foundation is committed to training professionals for the nation and offering students with limited means great learning opportunities. I am very pleased with their accomplishments, and that the Foundation can help people rise out of poverty and contribute to the nation." 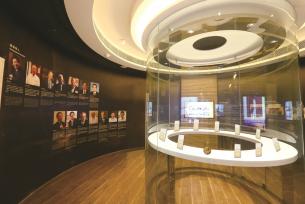 SHKP-Kwoks' Foundation Executive Director Amy Kwok and Nanjing University Vice President and Foundation for Education & Development Executive Vice-Chairman Ren Lijian (centre, side by side) with guests at a signing ceremony