To celebrate the 25th anniversary of the return of Hong Kong to the Motherland China, Sun Hung Kai Properties (SHKP) recently launched a range of special events. One of them was "Better Than Ever—Art Exhibition by Renowned Artists in Celebration of the 25th Anniversary of Hong Kong's Return to the Motherland", of which Sun Hung Kai Properties Charitable Fund was a key sponsor. This event brought together classic masterpieces and contemporary art pieces to showcase the charms of traditional Chinese culture. SHKP Club invited members and their loved ones to an exclusive preview where they were able to enjoy up-close access to the classic artworks in the stunning setting of the sky100 Hong Kong Observation Deck with 360-degree unobstructed views.

The exhibition consisted of four sections: "Tribute to Classics", which displayed the works of Chinese painting masters since the founding of the People's Republic of China; "Uninterrupted Inheritance of Cultural Context", which shed light on the continuation and development of the new-century Chinese artistic and cultural context in the contemporary era; "Impressions of the Guangdong-Hong Kong-Macao Greater Bay Area", which demonstrated the thematic creations by Guangdong and Hong Kong artists against the backdrop of the construction of the Guangdong-Hong Kong-Macao Greater Bay Area; and "Bauhinia in Bloom", which introduced sensational art creations by young Chinese artists, focusing on the bauhinia as the object. Of these, the "Tribute to Classics" section brought together masterpieces by a number of Chinese painting masters to showcase the continuation and development of Chinese art in the 21st Century, as well as the prosperity and flourishing of contemporary Chinese literature and art brought about by the cultural integration of Guangdong and Hong Kong against the backdrop of the development of the Greater Bay Area.

Dr Fan Chuan-geng, who has been studying ethnology for many years, acted as a guide during the exclusive preview session for SHKP Club members. Dr Fan introduced to members and their loved ones the unique features of the exhibits, including Qi Baishi's work " Shrimp" and Liu Haisu's "Running". Participants also had interesting exchanges with Dr Fan and learned much. 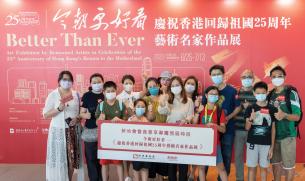 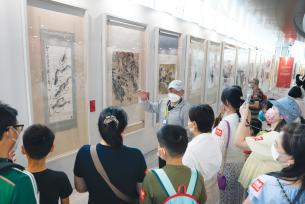