Many people like to travel during the Chinese New Year holidays and experience different festive atmospheres. The Year of the Goat is almost here and Shanghai ifc mall and iapm have planned a series of celebrations to spread New Year happiness.

Paddington BearTM is coming to Shanghai all the way from London to bask in the attention of his admirers! The lovable bear will spend Chinese New Year and Valentine's Day with visitors at Shanghai ifc mall, which will have big Paddington Bear Brings Luck for Chinese New Year decorations in the first floor atrium. A three-metre Paddington Bear in traditional Chinese costume will wish customers a lucky, blessed and successful Year of the Goat, flanked by two golden goats with their heads held high as signs of wealth, prosperity and good fortune in the New Year! The mall will also celebrate the festival with various spending rewards and activities for customers.

Club members can get a set of limited-edition red packets with any purchase in Shanghai ifc mall on 14 and 15 February. Only 50 sets available on a first come, first served basis.

The Blossom Garden in Spring at iapm

The Year of the Goat brings spring and happiness! The Blossom Garden in Spring has been set up in the mall including traditional Zodiac signs and auspicious elements. The colours and happy, joyous scene create a vivid picture of the season and bring customers plenty of luck! iapm also had trendy French illustrator Marie Desbons create a series of cute sheep with a lively, natural touch. The sheep sculptures reinforce the cheerful atmosphere of Chinese New Year. The mall's outdoor garden also has various seasonal flowers that signify hope and luck for the start of the year. A pair of topiary sheep show love for each other and double butterflies arranged with flowers wish love upon all the couples in the world.

Members making any purchase (non-members must spend RMB300) at iapm until 18 February 2015 can get a set of limited-edition iapm red packets. Machine-printed receipts must be presented. Only 50 sets available on a first come, first served basis. 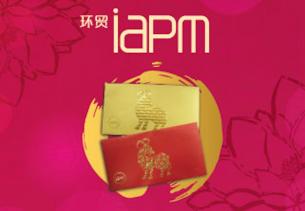