Charming Western Australia not far away

Drawing a straight line from Hong Kong towards the south up to the southern hemisphere, you will cut through Western Australia’s only big city – Perth. It is in a sparsely-populated area and has few high-rise buildings, but there is lots of sunshine and abundant minerals all around. It is only about six hours away from Hong Kong by air.

Perth faces the vast Indian ocean and is backed by pristine grasslands. It is one of the most isolated big cities in the world, but whether under the blue sky or in a café, there is the leisure of rustic comfort.

Western Australia has a long stretch of coastline. North of Perth is Geraldton; an agricultural and fishing town with a population of just over 20,000. It is also an important port in Western Australia. As the price of lobster rises five to ten times at Chinese New Year, the fishermen here can make a fairly good living every year by putting lobster cages in the sea regularly and retrieving them after a few months.

Return to Perth aboard a prop aircraft and then drive for about two hours to reach Margaret River; the famous wine producing area in the south-western part of Australia. Towns along the Margaret River get year-round sunshine and have seaside trails and parks full of greenery, offering a simple life of comfort and perfect ease.

This wine producing area encompasses more than a hundred small wineries. Its annual production capacity is not high, but the wines are of premium quality and are leaders among New World reds. Each winery has a unique selling point; some are famous for their picturesque scenery, others may boast well-known chefs or work hard but keep a low profile. I believe that one should follow the heart in order to get pleasant surprises while touring wineries.

Transportation: Driving is the most convenient way of travelling in Perth and Margaret River, but it is better to fly or take trains to visit other cities in Western Australia

Weather: Australia is famous for its sunshine. Summer runs from December to February and winter from June to August.

by Yanyu, winner of the second Young Writers’ Debut competition 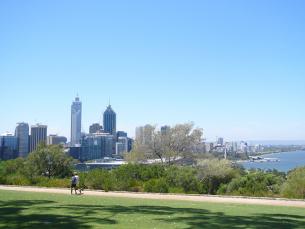 Enjoying a moment of leisure in a cafe

Geraldton beach with no one in sight

A family in Western Australia cooking up an authentic barbecue