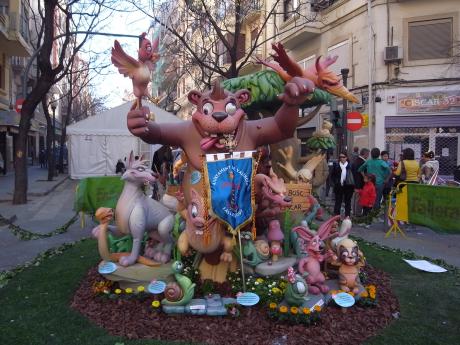 See a 20-foot high monster engulfed by flames and face the raging fire with heart pounding to get an idea of what it is like for the people at the Valencia Fire Festival in the early morning of 19 March every year.

Every ethnic group has its own unique way of celebrating the transition from winter to spring. Hong Kong has fireworks on the second day of Chinese New Year and in Valencia they burn what they call fallas to mark the new replacing the old. Fallas are set up every few blocks along the streets of Valencia from 1 to 19 March. The larger ones are five or six stories high and smaller versions are the size of a person. Strolling the alleys of this ancient city and encountering large fallas can make a person feel like a dwarf in a country of giants.

But don't get swept up or lost in backstreets because the daytime fireworks (Mascletà) in the town square (Plaza del Ayuntamiento) at 2:00 pm are a must see. People in the square are packed like sardines in the crowd and then suddenly hundreds of fireworks shoot high up into the air as white smoke clouds the sky. Your nostrils will be filled with the smell of gunpowder as loud cracks bombard the ears. All this and the cheers and heat of the crowd give a true experience of Spanish passion.

People in Valencia wear traditional dress for two of the last three days of the Fire Festival and walk from the town square to the Church of Our Lady (Nuestra Virgen de los Desamparados) carrying flowers for the seven-story Virgin Mary. The main event runs from 11:00 pm on 18 March to early the next morning as crowds gather by the large fallas. Workers shovel mud to surround the fallas and wind long incendiary fuses around them before setting them alight. Crowds circle around dancing and singing, and when all the fallas are burnt a 20-minute firework display by the riverside of Paseo de la Alameda puts a perfect finish to the festival.

Transport: Fly to Barcelona in Spain and take a train from Sants to Estación del Norte in Valencia. You can get a programme and map of Las Fallas events at the visitor centre.
Currency: Euro
Climate: Mild in March with temperatures from 18° to 25°C
Valencia travel website: www.visitvalencia.com 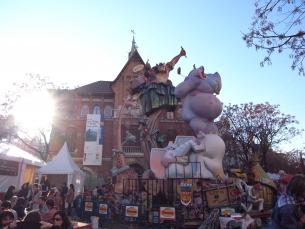 Multi-storey fallas in front of a church 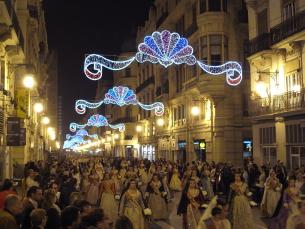 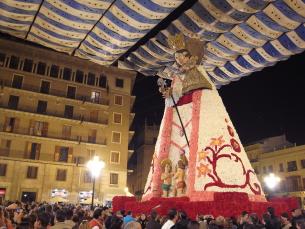 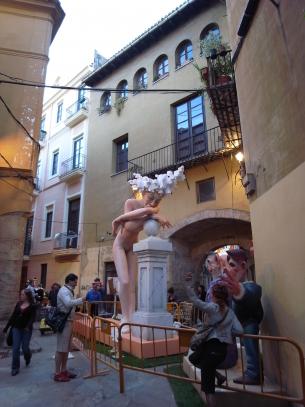 Large fallas dot the alleys of the ancient city